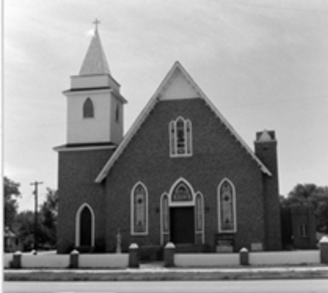 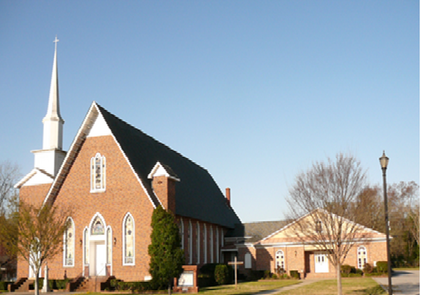 On January 22, 1866 only a few months after the last shot had been fired ending the Civil War, 106 charter members assembled on the very site that  Mt. Moriah is located today, for the purpose of organizing a church of their own. These men and women came armed with letters of dismissal from the Camden Baptist Church (now known as Camden First Baptist Church), Camden, SC and Swift Creek Baptist Church, (Boykin Mill Pond), Boykin, SC,  about eight miles South of Camden. During the Slave Era, the original members of Mt. Moriah had been permitted to attend those churches and sit upstairs in the balconies.

To assist in organizing Mt. Moriah properly, officers of the Camden Baptist Church came to aid in planning the independent church.  Help also came from the American Baptist Home Mission Society by Rev. S. H. Corey and the Rev. James Hamilton.  The initial meetings  and church services were held in a converted blacksmith shop located behind the present site of Mt. Moriah. The founders met at 11:00 AM on the first day and at 3:30 PM again on the same day. At the first day's meeting a committee of five was appointed to write the church constitution, the articles of faith and plan an agenda. On Monday, January 23, 1866 the founding fathers met again. At this meeting they adopted the constitution and chose the name Mount Moriah. At all of the early meetings of our church, business or regular services, prayer meetings were always held.

The first officers of the church were Deacons: Josiah McGirt, Reuben Brown and Hardy Kennedy. The first clerk was March Martin. The first evangelist was Hermon Jones. Our church grew rapidly from the very beginning. Many new members were taken in the church and baptized. On February 10, 1866, less than a month after our church was organized 16 members were baptized, and on May 7, twenty-eight more people were baptized. Rev. Boykin, who believed that Christ was baptized in a running stream, insisted that all his members  be likewise baptized. All of the early members were baptized in the Factory Mill Pond on Dicey Ford Road.

Our original members appointed the first janitor, Mr. Guest, May 13, 1871; his salary was $1.00 per month. The first dues were 10 cents per Sunday for men and 5 cents for women.

In the early 1870s plans were made to build a new church and leave the dilapidated blacksmith shop they  had been worshipping in for several years. In order to build the new church, each member was asked to pay according to his ability to pay. Some men pledged $l.00, some 75 cents, some 50 cents and some 25 cents, but all members pledged to help build the new church.

In 1867 the Sunday School was organized. The first teachers were March Martin, who taught the boys and Sarah Cantey who taught the girls. The Sunday School has been in continuous operation since its beginning and plays a major role in preparing our young people lives for Christian service in our church and community.  In 1951 during the Pastoralship of Rev. J. C. Wright, the church continued to grow, and much progress was made. New pews were installed, new furniture was installed in the pulpit and a new Hammond Pipe Organ was bought. The church was completely renovated.  On January 5, 1956, the interior of the church was destroyed by fire. The membership was  shocked, crestfallen, discouraged, but not down-hearted. Rev. Wright, who was pastor, officers and members began to pray, dream, plan and pay in order to build a new Mt. Moriah. In 1957, a new tower was built. Under the leadership of Rev. Dr. J. C. Levy, a new steeple was erected. In 1984 Mt. Moriah Soup Kitchen was established and the Center for Christian Education was built. ​

2012 the balcony in the rear of the church was completely renovated with new floor, carpet, and furniture to accommodate the oncoming video system. In 2012, technology continued to increase with state of the art video projectors, screens and/or outlets in the Sanctuary, Classrooms, Fellowship Hall and Soup Kitchen in order for services and videos to be viewed in these areas.

January 2016 Mt. Moriah turned the majestic age of 150, a Sesquicentennial Year. Appreciation Celebrations for various community organizations such as, Law Enforcement, and KC School District, Volunteer Workers, and many other community organization were given each month of 2016. The first appreciation was for our members, handmade Appreciation Gift Bags were given to each member. July 2016  special "Prayer Room" was dedicated and blessed. A Prayer Garden was established directly in front of the Education Building. The Prayer Garden will be completed and Blessed at a later date.

Fast-forward to years 2019 - 2022: Pandamic  Coronavirus still are raging in 2022, presently caused over 900,000 deaths. The Coronavirus 19 came December 2019. Our Church was closed for inperson Service March 8 2020 - May 2021.  First outside drive-in service were held June 21, 2020 - November 15, 2021.  June 13, 2021 first service returned to in person worshipping, following the CDC regulations of 6 feet apart. The church was  professionally  sanitized. During the months of closing of our church the church still continue to collect tithes and offerings on Saturdays drive-up. Some members perfered to pay online or mail their offerings.  Our church family continue to move on.  October 10, 2021 a Drum Set was donated to our chuch; by Deacon and Deaconess George and Debra K. Randolph. In loving memory of the late and former Minister of Music, Mr. George Ralph Mills, Jr. and in recognition of our first trained drummers: Miss Jazzmin Devlin, Master Taylor Kelly and Master George H. Randolph, III. Also given in the recognition of the importance of worshipping the Lord with music using musical instruments. In Psalm 33, the Psalmist urges the congregation to praise God with music and dancing. Psalm 150: In Context says: Rejoice in the LORD, O ye righteous: for praise is comely for the upright. Praise the LORD with harp: sing unto Him with the Psaltery and instruments of ten strings. Sing unto Him a new song; play skillfully with a loud noise. Praise Him with the clashing of cymbals, praise him with resounding cymbals For the Word of the LORD is right; and all His works are done in truth. He loveth righteousness and the judgement: the earth is full of the goodness of the LORD.

Presently, for our churches 156 Anniversary, we are still practicing the CDC Regulations for the Pandemic. Services are still being held inside and in person, in the santuary.  All of our members have not felt comfortable enough to return to this date January 23, 2022.

TO GOD WE GIVE THE GLORY FOR ALL THE GREAT THINGS HE IS DOING HERE AT MT. MORIAH BAPTIST CHURCH - CAMDEN, SC

was born a slave.  In the antebellum period, he was a member of Camden Baptist Church and was known as an "exhorter to the colored people." The new African-American congregation, Mount Moriah Baptist church, named him their first Pastor. He was also a missionary who established black Baptist Churches throughout South Carolina.

It was a dream, that began in the hearts and minds of our Founding Fathers, as they worked in the fields and homes of their masters during slavery.  It was a dream of an independent church where each member would have the rights and privileges of serving our Lord and Savior, Jesus Christ. It was a dream that paved the road to our history--a history that symbolizes Christian strength, courage and determination. A complete history of Mt. Moriah Baptist will never be told.​

BACK TO THE TOP 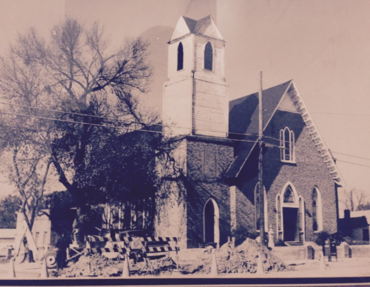